Ladies and gentlemen, we have finally arrived.  The matchup the baseball world has been patiently awaiting since mid-summer is finally here. Yankees. Astros. The 2019 American League Championship Series. A shot at a World Series title on the line.  How the two teams got here, however, could not be any more dissimilar.

The Yankees battled through a comical onslaught of injuries throughout the entire 2019 season, but still managed to thrive in the heavily contested American League East, racking up 103 wins and earning their first division crown in seven years.  The Astros, on the other hand, waltzed their way through the season behind their two-headed pitching monster in Justin Verlander & Gerrit Cole.  Come October, it was the Yankees who were able to breeze through the ALDS, running through the Minnesota Twins like a hot knife through butter en route to a three-game sweep.  Meanwhile, the Astros were pushed to the brink of elimination by the upstart Tampa Bay Rays, but behind Gerrit Cole, dominated Game 5 at home to earn their third consecutive trip to the ALCS.

So here we are. Again. Two years ago, these two teams went to battle in a seven-game classic that saw the Astros earn their first ever American League pennant.  The Yankees seeking vengeance for 2017, the Astros looking to return to the World Series for the second time in three seasons and cap off their stout 107-win season, will take to the field Saturday night in what is sure to be another all-time October matchup.

The ALCS kicks off on Saturday evening in Houston with Masahiro getting the ball for the Yankees against the Astros’ marquee trade deadline acquisition Zack Greinke.  After being stretched to five games against Tampa Bay, the Astros don’t have the benefit of lining up Verlander and Cole in games one and two, so this is a prime opportunity for the Yankees to steal back home-field advantage off the bat by taking game one on the road.

The Yankees struggled against Greinke twice this year, both when he was with Arizona, but neither time were the Yankees able to roll out their best lineups, and surely the added experience should benefit them in this one.  Similarly, the Astros couldn’t generate much against Tanaka in two appearances this season.  Tanaka combined for 12 innings, 11 hits, and only three earned runs in two starts against Houston this year. If ever a time for playoff Tanaka to show up and shine, game one is it. 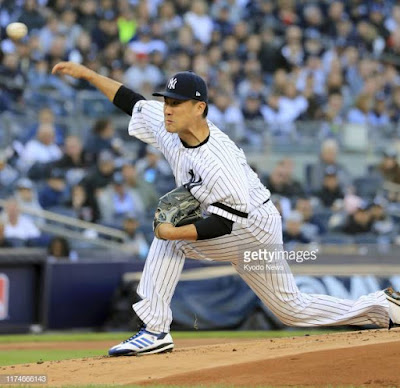 Justin Verlander did not look good on three days rest against Tampa Bay Tuesday afternoon in game four of the ALDS against the Rays, but he’ll be lined up to start game two on normal rest.  The Yankees have struggled against Verlander in October for as long as I can remember, as JV owns a career 4-0 record with a 2.33 ERA in 38.2 innings (six starts) with only 26 hits allowed against New York.

James Paxton did not look good in Houston early in the season, but after ending the regular season on the tear he did, you wouldn’t expect a repeat performance.  Paxton must look to just keep this game close while the Yankees’ offense must make Verlander work and get into their bullpen.  The Yankees don’t necessarily need to beat up on Verlander (although of course who wouldn’t say no to that?) to win this game, but if they can remain in it into the later innings and get to the Houston bullpen, they might be able to steal away this game.

Let’s get this out of the way upfront: Gerrit Cole is a monster and every Yankee fan should be scared about what he might do to us in this game.  However, you still need to play the game.  Cole was, somehow, even better on the road this season, owning a road ERA of 2.36 vs. 2.63 at home.  His opponents’ OPS was higher on the road, however, .621 vs. .541, so it’s not all bad news.  Cole absolutely shoved in two starts against Tampa Bay, going 15.2 innings with a 0.57 ERA in two starts, earning the win in both, while striking out a ridiculous 25 batters and allowing only six hits.

Luis Severino will be making only his fifth start of the season, but he looked very good in his ALDS game three clinching start against Minnesota on Monday.  Severino’s pitch count was a little higher that you would like in four innings, with Minnesota consistently putting men on base against him, but Sevy did not break, keeping the Twins off the board and handing a lead over the bullpen, one they did not give away.

Neither team has announced a starter for game four yet, although this may end up being Brad Peacock for Houston and either JA Happ or a bullpen game for New York.  Houston might also try to throw Greinke on three days rest, but after seeing how poorly Verlander responded to short rest in the ALDS, I wouldn’t bank on that. Should the Yankees go with a bullpen game, it’ll probably be Chad Green as the opener and then Happ as the ‘bulk guy’, with CC Sabathia likely to make an appearance as well.

An interesting wrinkle to New York’s roster construction popped up this week when Aaron Hicks, originally thought to have been shut down for the season, showed up in Tampa ready to work, then made his way to New York for team workouts, and now, miraculously, appears to have made the ALCS roster in place of Tyler Wade.  Hicks shouldn’t be expected to start (although Boone hasn’t ruled that out yet) due to the fact that he hasn’t faced MLB pitching in two months, but he does provide an elite outfield glove, and the Yankees will surely continue the blueprint they set in the ALDS:  Giancarlo Stanton plays roughly six innings and gets three at-bats, and then is replaced in left field late in the game if the Yankees have the lead.

The Yankees have had a special feel to them all season.  The way they were able to overcome, hell even thrive, in the face of adversity with a record-setting number of IL stints has been nothing short of astounding.  However, there is still work to be done.  This series will be a battle, a grind, and take-years-off-your-life duel of the two best teams in the American League with a trip to the 2019 Fall Classic on the line.  Will this group of Savages finally break through to claim the pennant?  It all begins Saturday evening.