Showing posts from February, 2020
Show all

As injuries continue to mount, when can we start pointing fingers at the new S&C team? 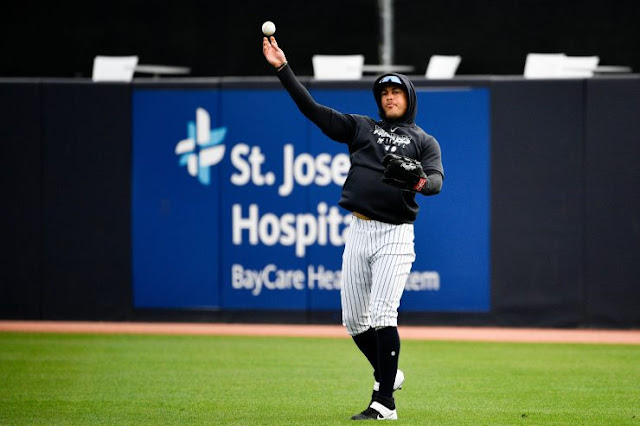 Look, I get it.   Injuries happen.   There’s no way around that.   But the total shitstorm we are currently experiencing AGAIN has the feel of something much, much worse than just some early Spring Training getting-the-kinks-worked-out nonsense.  The Yankees are once again falling apart in front of us and it's not even March.  I am absolutely worried right now. Photo Credit: Douglas DeFelice/USA TODAY Sports
Post a Comment
Read more 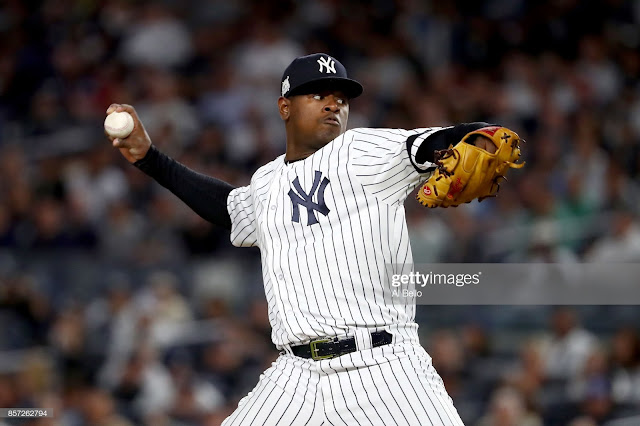 Brian Cashman says Luis Severino needs Tommy John surgery. — Bryan Hoch (@BryanHoch) February 25, 2020 This hurts. After missing most of the 2019 season with a shoulder issue, Luis Severino's 2020 season has ended before it even began with the news today that he needs Tommy John surgery.  Last week it was reported that Sevy would be returning to New York for further testing after feeling stiffness in his forearm, and this morning Brian Cashman announced the worst possible outcome. In the announcement, Cashman said that the plan is to get the surgery done as soon as possible, as he is currently evaluating which Doctor he will utilize to perform the surgery. Photo by Al Bello/Getty Images
1 comment
Read more

Who Slots in Following the Departure of Dellin Betances? 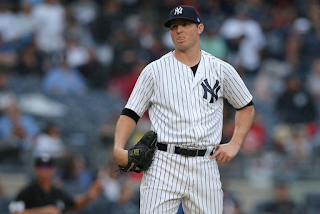 Following an injury-riddled season in 2019 where fans saw just one outing from 6’8” right-hander Dellin Betances, Yankees nation caught a case of the Christmas blues when word broke that he had signed a one-year deal that would send him across the East River to play in Queens. As a result of suffering a bone spur injury behind his right shoulder before Opening Day, along with tearing his Achilles tendon in his return on September 15, Betances missed virtually the entire season. Though the Yankees bullpen performed at an elite level in 2019 despite Betances’ absence, he is still one of the best relievers in baseball when healthy. Brad Penner / USA Today Sports
Post a Comment
Read more

How the Yankees plan to cover for Domingo German while suspended 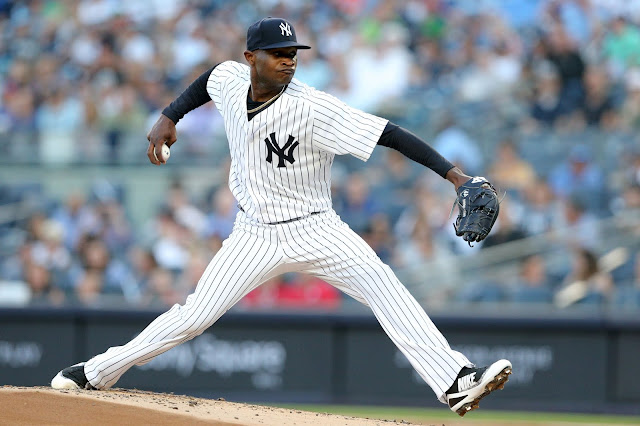 Despite being one of the team’s top starting pitchers for the entirety of the 2019 season, Domingo German was not a part of the Yankees’ postseason run due to his suspension under Major League Baseball’s domestic violence policy.  German was held out of the final week of the regular season, and the entirety of the playoffs - a total of 18 games in all - before finally getting hit with an 81-game suspension this winter that will carry into June.     Photo Credit: Brad Penner/USA TODAY Sports
Post a Comment
Read more

Three keys to Miguel Andujar reclaiming his starting spot at 3B 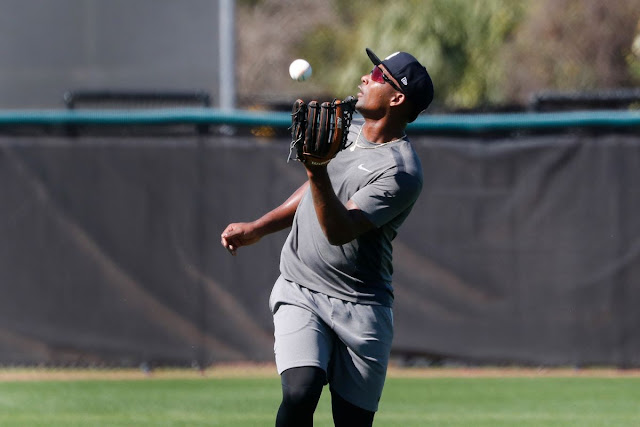 2019 was not an easy year for one Miguel Andujar.  After a runner up finish in the American League Rookie of the Year voting in 2018 behind only Shohei Ohtani, Yankees fans and staff alike expected Miggy to come out swinging in 2019. Photo credit: New York Post
Post a Comment
Read more 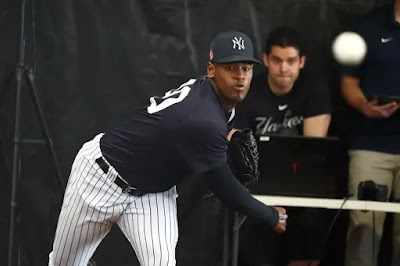 The Yankees announced on Thursday that RHP Luis Severino would be shut down for "a few days" after he experienced discomfort in his forearm Wednesday night and again Thursday morning. Severino was scheduled to throw a bullpen on Thursday.  According to Aaron Boone, Severino has a "loose body" in his arm and this has been an on again off again issue for Severino dating back to his last start of the ALCS against Houston in October.  Per Sweeny Murti, Severino had MRIs in both December and February that came back clean.  It was initially reported that Severino would see Dr Christopher Ahmad on Friday and Jack Curry later clarified that Severino has been prescribed anti-inflammatories and rest but its is unclear when or if Severino will see Dr Ahmad.
Post a Comment
Read more 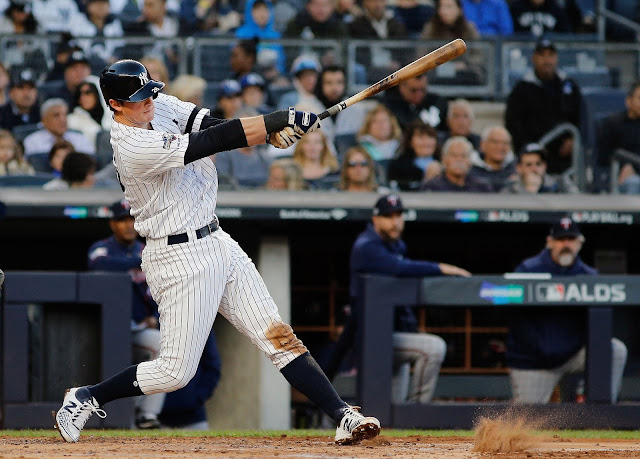 Coming off of an MVP caliber first season with the Yankees, DJ LeMahieu spoke to the media for the first time this spring and addressed a number of topics. Normally a man of few words, LeMahieu expressed his opinion on the Astros cheating scandal and how he rated his first season in pinstripes. Yankee fans weren't sure what to expect from DJ heading into last season, the first of a two year $24 million deal, but he quickly impressed the fans with his play and calm demeanor and earned the nickname "The Machine". Photo Credit: USA Today
Post a Comment
Read more

Should the sign stealing scandal be the last straw for Rob Manfred? 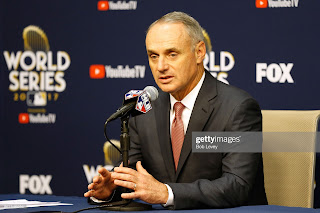 Rob Manfred should be relieved of his duties as the Commissioner of the MLB. After seeing his interview on ESPN, it seems clear that the MLB completely mismanaged the Astros’ sign stealing scandal. Should this be the Commissioner’s last straw? Rob Manfred has now been the Commissioner of the MLB for five full years, and throughout his tenure, the league has steadily receded down the power rankings of major US sports leagues. While the NFL, NBA, NHL, and even MLS have grown exponentially over the past few years, MLB attendance has decreased in every year of Manfred’s tenure and World Series viewership has decreased every year since the 2016 World Series pitted two clubs against each other, the Cubs and the Indians, who collectively hadn’t won a title in over 175 years. Photo by Bob Levey/Getty Images “I understand” is a phrase that was uttered no less than 30 times in the 45-minute interview that Rob Manfred undertook with ESPN’s Karl Ravech, when talking about fans’ unhapp
Post a Comment
Read more
More posts