This weekend in the Bronx, the Yankees completed a three-game sweep of the Boston Red Sox to bring their record to 7-1 in this unprecedented short season. In game one, Suzyn Waldman serenaded an empty Yankee Stadium with the National Anthem and CC Sabathia returned to throw out the first pitch.  Jordan Montgomery and the bullpen held the Sox to just one run­–a solo shot off the bat of Michael Chavis in the third.  Home runs from Aaron Judge, Gio Urshela, and Brett Gardner propelled the Bombers past the Red Sox to a 5-1 win.  Gardy’s homer ended his hitless start to the 2020 season, where he was previously 0-for-12 with seven Ks. 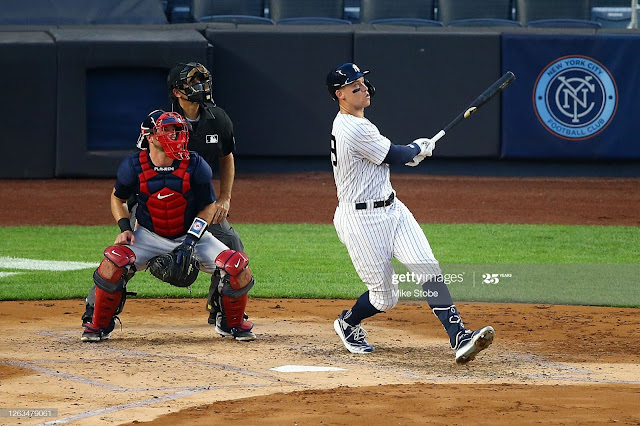 In game two, the Yankees once again relied on the long ball for the win. Aaron Judge blasted a 455-foot home run to deep center field in the first inning, his fourth home run in as many games.  The following inning, Gio Urshela extended the lead to 5-0 with a grand slam to Monument Park.  In his return to the mound since being struck in the head during spring training 2.0, Masahiro Tanaka pitched 2.2 innings (4 H, 2 R, 1 BB, 3 K).  Tanaka’s short start gave Nick Nelson the opportunity to make an impressive MLB debut in game two.  Nelson dazzled in three innings of no-hit baseball, earning three strikeouts and his first career victory in a 5-2 win for the Yanks.

In the final game of this set, James Paxton pitched another tumultuous start, but the Yankees escaped with a win to complete the sweep.  In typical Sox-Yanks Sunday Night Baseball fashion, this game was full of back and forth scoring.  Xander Bogaerts struck first for the Sox with a two-run homer but Judge quickly answered with a three-run shot to reclaim the lead and extend his home run streak to five games.  Judge was a hero yet again in the eighth with the game tied 7-7 when he absolutely crushed a two-run bomb to left center.

Judge has hit an incredible six home runs in five games.  His clutch season continues.  ALL RISE!  Zack Britton closed out the game 1-2-3 to earn his third save of the season. #StartSpreadingTheNews, the Yankees win their sixth straight game and head into the next series vs. the Phillies with only one loss in 2020.

Scores from the Series