Welcome to day two of BBBets! Well, we had a less than stellar debut yesterday with the majority of our picks falling short.  However, our highest unit bet – taking the Yankees/Jays over – did hit at 3u.  The bad news? The Yankees got clobbered in a 14-1 embarrassment in Buffalo.  If you bet the over, at least you were able to make some money in the face of a pathetic showing this close to the playoffs.  BUT WE MOVE FORWARD. 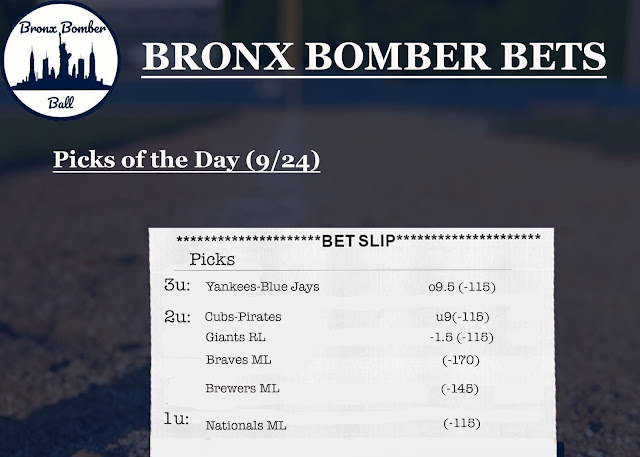 To recap, the three key betting types we’ll highlight are as follows:

Today, we’re keeping our foot on the gas for Yankees/Jays over which is currently set at 9.5 with -115 odds.  The Yankees have covered the over in eight of their last night games, so we’ll keep the good times rolling.  A bet of $115 here pays out at $100 if the teams score 10 or more runs.

The Cubs and Pirates have combined for eight totals runs over their last two games and the Cubs offense has stalled out of late, scoring three or less in six of their last seven games.  Alec Mills has a no-hitter on his recent resume and the Pirates have struggled to hit all year.  Look for this to be a low scoring affair again. If the teams combine for less than nine runs a bet of $115 pays at $100.

The Giants are coming off back-to-back wins against the Rockies and close out their season series with them tonight with Kevin Gausman (3-3, 3.76) on the bump facing Chi Chi Gonzalez who has struggled this season to the tune of an 0-2 record with a gaudy 7.53 ERA.  For this bet, you need the Giants to win by two or more runs for a $115 bet to payout $100.

Atlanta has had Miami’s number all season and look for more of the same tonight with Ian Anderson (3-1, 2.36) going for the NL East champions.  The odds heavily favor the Braves here, so you must bet $170 to win $100.

Corbin Burnes will take the ball for the Brewers looking to complete a sparkling season that currently has him in the NL Cy Young conversation.  He enters today at 4-0 and his 1.77 ERA leads the National League among qualified starters.  Here, a bet of $145 is required to win $100.

This game is an ugly one to predict, as both the Mets and Nationals have been pretty awful this year, however, we like Patrick Corbin at home, despite his struggles in 2020. Roll with the defending champs here at one unit.  Bet $115 to win $100.

That’s it for today! Let’s hope for some better results compared to yesterday.  Be sure to stop back tomorrow and every day the rest of the season – including the postseason – for more BBBets. And of course, always bet responsibly.