The Yankees announced their roster for the Wild Card series early on Tuesday, and Miguel Andujar was left off of it. Heading into the postseason, the INF/OF Andujar was the biggest question mark for the team, and whether he would be included on the roster or not. Instead, the Yankees decided in favor of having first baseman Mike Ford and third string catcher Erik Kratz on the bench. The third baseman and outfielder was hoping that a strong finish to the season could earn himself a spot on the roster, as he went 9-for-25 in September with four extra-base hits. However, it seems that the lefty bat of Ford (who went hitless at 0-for-19 in the final month of the season) gave him the advantage, as the team only has three lefty bats plus the switch-hitting Aaron Hicks on the roster, not including Ford. 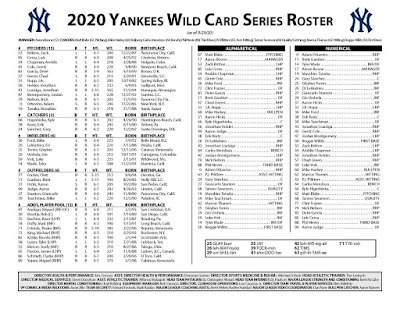 Andujar was included on the Additional Player Pool, with other notable players included being: INF Thairo Estrada, RHP Michael King, RHP Clarke Schmidt, and even LHP James Paxton. The team decided to bring 13 pitchers on the active roster, three catchers, six infielders, and six outfielders, as seen above.

The Yankees begin their three game Wild Card series in Cleveland against the Indians tonight at 7:00 PM, as Gerrit Cole will face Shane Bieber in a battle of aces. The Yankees starting lineup looks like it will have Kyle Higashioka at catcher, as he has caught for Cole’s last four starts, in which he has gone 27 IP and given up only three earned runs. The infield should remain the same as it has been most of the season when healthy, with MLB homerun champion Luke Voit at first base and MLB batting champion DJ LeMahieu at second base, Gleyber Torres starting at shortstop, and Gio Urshela starting at third base. The starting outfield has been another question, as many wonder whether Aaron Boone will elect to start Clint Frazier in left, or if he will go with old reliable in Brett Gardner. The other two outfield slots will be filled by both the Aarons, Hicks and Judge in center and right, with the DH spot being taken by Giancarlo Stanton.