By Mary Grace Donaldson - September 03, 2020
There are a few big differences between last year’s story surrounding Yankees injuries and this year’s story.  The fact that this season only consists of 60 games and every game this season counts as much as 2.7 games in a 162-game season is chief among them.  The fact that history is repeating itself is another.  But another notable difference between this tale of two injury-heavy seasons for the Yankees is that DJ LeMahieu was not among the walking wounded in 2019.


LeMahieu led the charge of the #NextManUp movement in 2019.  He was in the running for the American League batting title and came in fourth in MVP voting.  Of course #NeverForget LeMahieu’s clutch homer at the end of the 2019 ALCS, the goal of which was to try to keep the Yankees in the game when all seemed lost.

But 2020 looked a little different, as does pretty much everything in 2020.  First, LeMahieu started Summer Camp on the sidelines after he tested positive for COVID-19.  Thankfully, he was asymptomatic, and was in the lineup on Opening Day.  Then, he was placed on the 10-Day IL as of August 15th for a left thumb injury.

But the thumb injury didn’t keep The Machine down for long; he was back in the lineup against the Mets on August 30th.  To the surprise of literally no one, his return to the lineup was marked with a third-inning triple.

In the Yankees’ loss to the Rays on August 31st, LeMahieu was one of the bright spots of the game.  He went 2-for-5 with one run scored.  But LeMahieu, in his classic style, became the main reason why the Yankees defeated the Rays at long last on September 1st, in spite of the tumultuous brawl at the end of the game.  The Machine put the Yankees on the board with a solo home run in the bottom of the first inning.  For good measure, he added on a second solo home run in the bottom of the third.

While the Yankees fell to the Rays on September 2nd, LeMahieu made an attempt to keep the Yankees alive heading into the bottom of the 9th inning, with the Yankees down 5-1.  An RBI single from LeMahieu brought Brett Gardner home, to make the score 5-2.  Moral of the story: the Machine never gives up.

Finally, this stat, brought to us by Talkin’ Yanks (prior to September 2nd game vs. Rays), proves that LeMahieu is an invaluable part of this Yankees’ squad.  His presence in the lineup defines the word “difference-maker.” 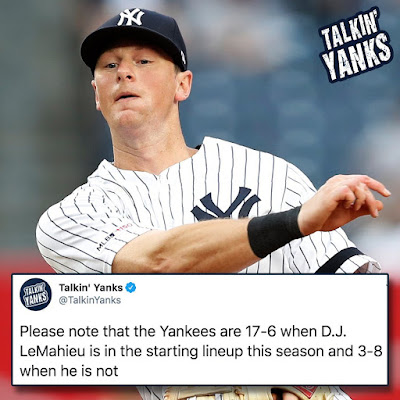