By Mary Grace Donaldson - September 21, 2020
Your attention please, ladies and gentlemen… after a rather depressing dry spell, it is fun to be a Yankees fan again in 2020. 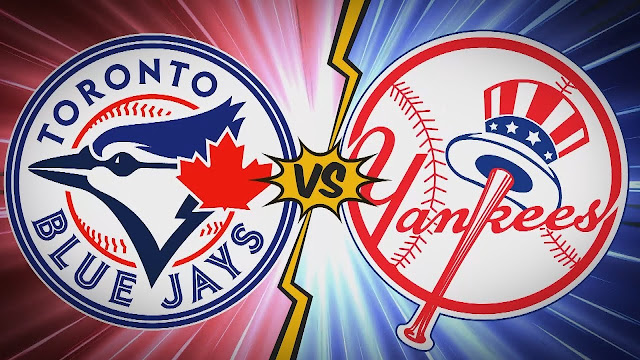 The Bombers just came off a ten-game winning streak, are locked in to complete their 28th winning season in a row and have clinched a postseason berth in the shortened 2020 season.  In spite of Sunday’s loss to the Boston Red Sox, they showed some fight in late innings in an attempted rally.  They swept the Toronto Blue Jays.  They set MLB records for most home runs hit in one game on consecutive days.  They came back from behind to beat the Red Sox in extra innings on Friday.  They’ve made such a comeback to the point that losing on Sunday did not hurt their playoff chances.
But there’s still something to play for in the upcoming regular season games. With one week to go, the Yankees sit 3.5 games behind the Rays for the division lead. With playoff rankings and home field advantage at stake, the Yankees will return to Buffalo, where they fell from grace the last time they played the Blue Jays in their temporary home.  But if the most recent Blue Jays series is any indication, the Yanks will come out of this series with fewer issues -- not to mention, they have fewer players on the injured list this time around.
As the postseason looms closer, both series this week are important, but the Blue Jays series will change division rankings.  However, the Yankees still can’t get complacent against the second-place Miami Marlins and blow it off as “just an interleague game.” Every win and every loss now matters, and thankfully, they can pick up wins in that series at home.  The Yankees are in great stead at present, but they’ve proven this season that complacency is dangerous and lesser teams can still win, even when on a winning streak.
Without further ado, we look at the matchups:
Monday, September 21, 2020 – Yankees @ Blue Jays | First Pitch 6:37 PM | TV: YES Network, MLBN (Out of Market)
TBD (1-1, 6.75 ERA) vs Matt Shoemaker (0-1, 4.91 ERA)
Tuesday, September 22, 2020 – Yankees @ Blue Jays | First Pitch 6:37 PM | TV: YES Network
Gerrit Cole (6-3, 3.00 ERA) vs TBD (0-0, -.-- ERA)
Wednesday, September 23, 2020 – Yankees @ Blue Jays | First Pitch 6:37 PM | TV: YES Network
Masahiro Tanaka (3-2, 3.27 ERA) vs TBD (0-0, -.-- ERA)
Thursday, September 24, 2020 – Yankees @ Blue Jays | First Pitch 6:37 PM | TV: YES Network, MLBN (Out of Market)
TBD (0-0, -.-- ERA) vs TBD (0-0, -.-- ERA)
Friday, September 25, 2020 – Marlins @ Yankees | First Pitch 7:05 PM | TV: YES Network
TBD (0-0, -.-- ERA) vs TBD (0-0, -.-- ERA)
Saturday, September 26, 2020 – Marlins @ Yankees | First Pitch 1:05 PM | TV: YES Network, MLBN (Out of Market)
TBD (0-0, -.-- ERA) vs TBD (0-0, -.-- ERA)
Sunday, September 27, 2020 – Marlins @ Yankees | First Pitch 3:05 PM | TV: YES Network
TBD (0-0, -.-- ERA) vs TBD (0-0, -.-- ERA)
While a number of starting pitching announcements haven’t been made by teams yet for these two upcoming series’, on the Yankees side, we’ll know definitely have the chance to see Gerrit Cole and Masahiro Tanaka.  Aaron Boone has opted to push them back to Tuesday/Wednesday and probably go with an opener on Monday as he's already thinking long-term into the start of the postseason.  We’ll most likely see Jordan Montgomery on Thursday or Friday. Montgomery did not look great in his last outing; however, the Blue Jays are a lifetime 7-for-29 against him with just one home run.
On the Blue Jays side, the only announcement we’ve seen is Matt Shoemaker will make his return from the Injured List after a right shoulder injury on Monday, in a start against the Yanks. But, the Yanks are a lifetime 12-for-33 against Shoemaker, with two home runs and six RBIs.
What to Watch For:
1. Gary Sanchez Redemption Tour
If Sanchez’ clutch extra-inning home run against the Red Sox, in Boston on September 18th is any indication, he is long overdue for a hot streak.  After a disappointing 2020 to this point, Sanchez is finally having big hits in spots that don’t just mark him adding to an already-dominating Yankees lead.
2. Cole Fire
For the month of September, Cole’s ERA checks in at 0.90.  While he certainly hasn’t had a bad season prior to September, he is truly showing what the Yankees paid for this month.  He’s playing postseason baseball before postseason baseball has even started.  Even Ji-Man Choi won’t be a threat to Cole against the Blue Jays, as Choi is on the I.L. with a Grade 1 hamstring injury.
3. King Louis
We all know Luke Voit is the new MLB home run king and AL MVP candidate.  The streak is bound to continue.  Even in the midst of the Yankees’ 10-2 loss on Sunday, Voit recorded his 21st home run on the season, and he hit it in an attempt to start a ninth-inning Yankees rally.
4. Getting Higgy With It
Kyle Higashioka surprised everyone in his three-home run game against none other than the Blue Jays last Wednesday.  He's also been in talks for earning the title of Cole's personal catcher, as Cole's glowing ERA has come largely in games when Higashioka was behind the plate.  He's shown himself to be a defensive asset which has led to more at-bats, which has led to important offensive contributions.  I'm willing to bet we're going to see more from Higgy, and his newfound recognition is well-earned.
If the one loss to the Red Sox showed anything, it showed that the Yankees’ enemy at this point in the season is complacency.  The offense looks great, but even DJ LeMahieu went 0-for-3 on Sunday, proving that everyone is human and needs to stay on their toes.   The Red Sox haven’t been good in 2020, and the Yankees were due for a loss, but complacency against lesser teams (i.e. the Marlins) has proven a problem.  If the Yankees perform against the Blue Jays in the fashion they did in their last meeting, they won’t have any problems.  If they don’t give into complacency against the Marlins, their hot streak will only continue.
Article by: Mary Grace Donaldson
Follow @TheRealGracieD