The New York Yankees opened up their 2021 campaign this weekend in unsatisfactory fashion, dropping two of three games at home to the rival Toronto Blue Jays.  The New York offense was held to just eight runs over the three games and only Gary Sanchez was able to put the ball into the seats over the three games.  The big story in this series was the total ineptitude of the Yankees’ offense, particularly in the clutch. 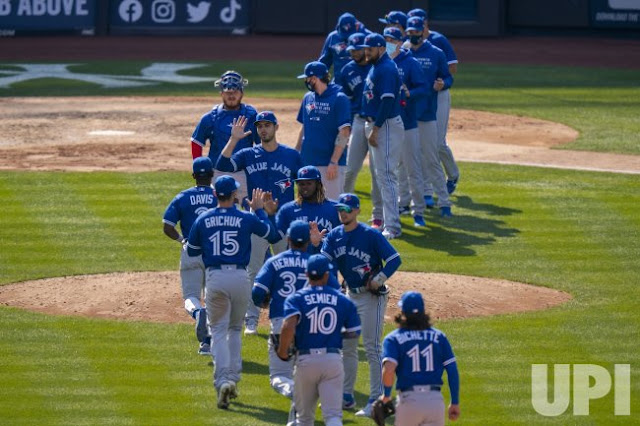 On Thursday, the Yankees lost a heartbreaker on Opening Day, falling to the Jays 3-2 in 10 innings; a victim of MLB’s highly controversial extra-innings rule which places a runner on second to begin all innings beyond the ninth.  The Jays were able to capitalize immediately, with Yankee-killer Randall Grichuk the hero, leading off the top of the tenth with an RBI double to right.  The Yankees three-four-five hitters (Hicks-Stanton-Torres) struck out in order against Julian Merryweather in the bottom of the frame. Gerrit Cole struck out eight in his season debut but surrendered a game-tying solo home run to Teoscar Hernandez in the sixth inning and left with the game tied at two.


In game two on Saturday afternoon, Jay Bruce played the role of hero, driving in two runs on a bloop single in the sixth inning.  Corey Kluber labored a bit in his Yankees debut, but limited the Blue Jays to just two runs before giving way to the bullpen.  Stellar outings from Jonathan Loaisiga, who earned the win in this one, and Chad Green, who picked up his first save of the season after recording the final four outs, limited the Jays in an 5-3 Yankees victory.

The rubber match on Sunday was anything but pleasant.  Domingo German got the start and, after retiring the Jays in order in the first, struggled in the second, allowing three runs on two home runs (Guerrero, Grichuk) which was all the offense Toronto would need.  The Blue Jays staff limited the New York offense to just a single run and the Jays left the Bronx with an opening series win by the count of 3-1. Despite the offensive no-show in this one, Mike King starred out of the bullpen, going six shutout innings in relief of German, allowing just a single hit.

The good news? The Yankees’ pitching staff was able to limit the vaunted Blue Jays offense to just three runs in each of the three games.  The bad news?  The Yankees somehow dropped two of those three games, going a combined 0-for-14 with RISP across the two losses.  The bats look lost early on.  In a long marathon of a season, however, there's plenty of time for them to find their footing.

The bullpen – Yankees relievers combined to go 15.2 IP in this series, allowing only two runs (one earned), seven hits, one walk and racking up 14 strikeouts.  The one unearned run came off of Nick Nelson in Thursday’s opener after Grichuk doubled to lead off the top of the tenth, scoring the auto-runner.  Nelson rebounded to strike out the next three hitters, but took the loss after the Yankees were unable to score in the bottom of the frame.

Clint Frazier – The Yankees’ left fielder went 4-for-9 in the opening series, reaching two additional times on walks. His 1.212 OPS trumps even that of Gary Sanchez who hit two home runs in the first two games.

Gary Sanchez – Speaking of Sanchez, the Kraken has the only two New York home runs to his name, launching go-ahead shots in both of the first two-games of the season.  Sanchez has struggled with some balls getting by him, but also added a caught stealing on Opening Day.

Aaron Judge – Judge has struggled in the early going, tallying just three hits over his first 14 at-bats, while also leaving an egregious 11 men on base. His rallying-killing double plays on Thursday and Sunday stand out as his most memorable moments of the series. Safe to say that’s not what you want from your #2 hitter.

Aaron Hicks – Hicks’ team worst slash line of .083/.214/.298 has been a crippling drag in the middle of the New York offense.  His patented control of the strike zone has also seemed to dissipate as well, as he’s struck out seven times over the first three games against just two walks.  Hicks got a vote of confidence from Aaron Boone in Sunday’s postgame, but his security in the #3 hole will be something to watch in the coming weeks.

The Yankees welcome the (gasp) first-place Baltimore Orioles starting tomorrow, April 5, for a three-game set at Yankee Stadium.  The Orioles are coming off an opening weekend sweep of the Red Sox at Fenway Park and will look to keep the good times rolling against the Bronx Bombers.  The Yankees will look to right the ship fast against a team that’s been their personal punching bag over the past two seasons.  Monday’s first pitch is scheduled for 6:35pm with Jorge Lopez set to start for the Orioles, while the Yankees will counter with Jordan Montgomery.