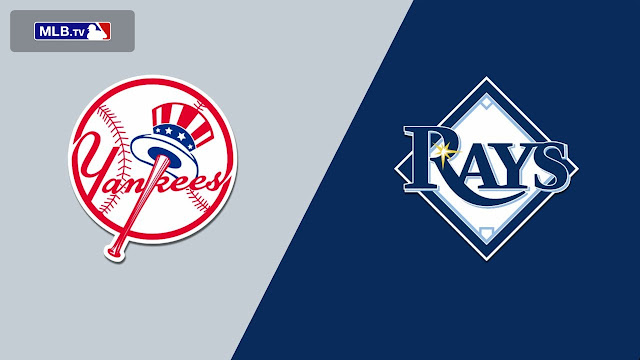 The Yankees hit the road coming off taking two-out-of-three games from the Washington Nationals.  It could be a bit premature to announce that the Yankees are “back;” however, winning every series with an overall record of 13-6 since April 18th is a really excellent start on that trajectory.  Additionally, they are back over .500 and are tied for second place in the AL East.  Both the Yanks and the Rays are now three games behind the first-place Red Sox.

This week the Yanks are traveling to meet two division rivals, and in one case, said rivals will be out for blood -- which they would be anyway even if they weren’t tied with the Yankees for second place.  On the midday WFAN broadcast on Monday, May 10th, Mark “Moose” Malusis talked a great deal about the Rays’ acting as the Yankees’ “ghost” -- a carry-over “curse” from last season.  The Rays, who weren’t all that dominant in the beginning of the 2021 season, still managed to hold the Yankees to a record of 1-5 in games played so far.  The second series consists of games that the Yankees should win provided they don’t become complacent.  What will that all look like?

Obviously, the Yankees always have the best chances to keep any opposing offense at bay with Gerrit Cole on the mound -- that nearly goes without saying.  Jordan Montgomery has great moments, but appears understandably inconsistent.  In his May 5th start against the Astros that eventually resulted in a Yankees win, Monty was on the hill for 6.0 IP, but allowed eight hits and three runs.  On the flip side, he didn’t allow any walks and struck out four.  Compared to one Gerrit Cole, four strikeouts doesn’t seem all that exciting, but it’s about the current average for Montgomery -- who has struck out between one and four batters in his starts on the season.  Monty is still working his way back into the rotation after being out for so long, and the only way in which he’ll improve is by pitching.  I just wish it wasn’t by pitching against the Rays -- but alas, Cole can’t pitch every game.

Jameson Taillon is in a similar boat to Monty, as he’s still working up to “where he was.”  In his May 7th start against the Nationals, he logged 6.1 IP and struck out five.  However, a final score of 11-4 is not necessarily telling of Taillon’s performance, but rather of failure by the Yankees’ offense to provide run support as well as the Nationals’ offense ability to outperform a tired Yankees bullpen (chief among it, a tired Jonathan Loaisiaga who suffered his first loss of the season -- but he’s been so dominant and he’s allowed to have a bad day).  Taillon only allowed three hits and one walk during his performance.  There’s still much to see from Taillon, but he’ll need run support from the offense -- especially against the Rays.

The Rays figure to mix in Ryan Yarbrough tonight following Patino and then will hand the ball to Josh Fleming and Rich Hill in the final two games of the series.

What to watch for:

Gleyber Good:
From his clutch single in extra innings on Saturday against the Nationals, to defensive moments that have helped him regain fan confidence at shortstop, Gleyber Torres has truly come to life in recent games.  Cross your fingers for continued momentum.  Our little Gleyber is all grown up.

Giancarlo, non si può stoparlo!:
Whatever Giancarlo Stanton is doing is what he needs to keep doing -- and Aaron Boone better not get any ideas about taking him out of the No. 2 hole.  It appears there’s no stopping Stanton, and it’s been so fun to watch.  While his bat was quieter during the Nationals’ series, his walkoff hit on Sunday made the weekend for the Yankees.  It was great to see Stanton hit in a clutch spot and play some small ball, and it will be great if that style of play continues on this road trip.

Lineup shakeups (thanks in part to injuries):
Injuries to Rougned Odor and Gio Urshela have led to a few switcheroos in the lineup.  We’ve seen DJ LeMahieu play 3B.  We’ve seen Brett Gardner and Clint Frazier both in the lineup.  We’ve seen Miguel Andujar step up, play both third base and first base and then, get sent back down to AAA.  We’ll probably see more switcheroos this week, depending on how far along Odor and Urshela are in their respective recoveries.  Odor will be eligible to return from the IL as early as this weekend.

Luuuuuuuuuke
Per the YES postgame broadcast on Sunday, it is highly possible that Luke Voit, having completed five rehab games with the RailRiders, is hopeful to return to the lineup for the Rays series.  With Andujar returning to Scranton/Wilkes-Barre following Sunday's game, the Yankees have made room for someone to return.  Based on Voit’s performance in the rehab games, he’s ready, and it will be great to have him back (that’s actually a gross understatement).