The Rise of Johnny Lasagna

In an otherwise bleak season for the 2021 New York Yankees, one bright spot in the bullpen comes in middle relief: Jonathan Loaisiga. 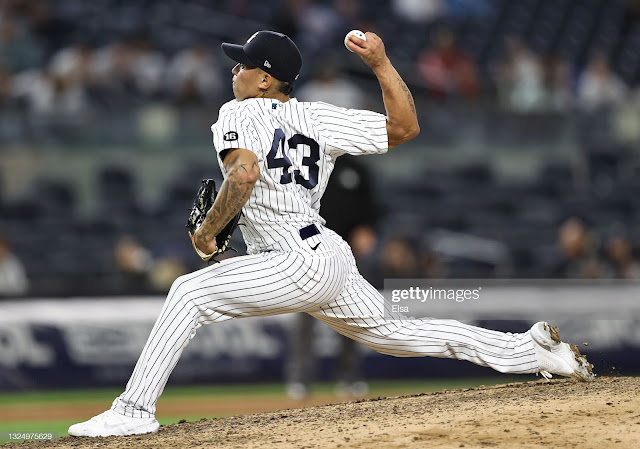 It’s a good thing, too -- Zack Britton and Darren O’Day are injured (again).  Nestor Cortes Jr. is looking more like an opener with each appearance (especially since his, well, successful opening appearance on July 4th).  Chad Green had his immaculate inning on Sunday and just picked up another save last night, but Aaron Boone cannot -- and should not -- burn him out.  Aroldis Chapman… let’s not.  Lucas Luetge keeps coming in to clean up the Chapman messes and instead, makes them worse.  Loaisiga has made consistent outings, and by all indicators, 2021 is Lasagna Time.

What are those indicators?

While this indicator might be more feelings-based than statistic-based, the worry that comes as a regular viewer of Yankees games when Chapman enters the game is non-existent this year when the bullpen door opens and Loaisiga comes out.  We don’t have to fret over implosions.  The comparison isn’t necessarily one featuring equivalent players as Loaisiga isn’t a closer; however, he’s a setup man, and he makes a closer’s life easier when he is consistent and holds the lead.  That… and if Chapman’s struggles continue, we could see Loaisiga take over the closer role.

Owns up when he messes up

The Yankees haven’t played consistent baseball of late -- kind of goes without saying.  Loaisiga, however, has made a consistent showing (as stated above).  There was one less than stellar showing from Loaisiga in the midst of the Yankees’ recent stretch, and unlike some of his teammates (and perhaps his manager) he did not make any small talk during his postgame presser.

"I lost the game, and Gerrit Cole threw a great game and I lost that for him"

Jonathan Loaisiga reflects on his outing tonight vs. the Royals pic.twitter.com/C8s4kARhKX

Middle relievers will usually pitch a little more than one inning.  On an ideal day, a starter will pitch six, seven innings. A middle reliever will come in during the bottom of the 7th, and then, a closer will come in for the 9th.  Since the start of the 2021 season, Loaisiga has pitched seven games in which he was in the game for two innings (in some cases, he logged 2.1 IP).  The fact that Loaisiga stays in the game shows that the coaching staff trusts his stuff.

Even if the Yankees don’t turn around this season in which many games have ended in disaster, Loaisiga already will be remembered for his efforts and consistency this year.  Some even say that he was snubbed in the All-Star Game voting, and should go to the All-Star Game instead of a certain Yankees closer.