It's been a long few days for the Yankees. While dropping two of three to the crosstown rival Mets during a huge playoff push is not what they wanted, they bounced back with a thrilling walk-off win against the Twins this afternoon. A lot has happened, and there’s a lot coming up. Let’s get into it.

The subway series started off on Friday, the Yanks sent Jordan Montgomery to the mound but did not get the performance that they wanted, with Gumby only going 3.1 innings giving up five earned runs. The Yanks could not bounce back from that start, and they dropped game one 10-3. Tyler Megill threw seven innings with 10 punchouts to get the win for the Mets. One of the biggest storylines of the day was Gary Sanchez. He had a tough day behind the dish, and it started early in the first inning. The Mets had a runner on second with two away when Javier Baez smoked a single into left field. Joey Gallo made the play, and threw a laser one hop strike to Gary Sanchez to cut off Jonathan Villar trying to score. Villar was called out, but the call was overturned saying Gary missed the tag and Villar was safe. This was a particularly egregious error because the throw beat the runner by at least five feet. Gary did not get down to place an aggressive tag and allowed the Mets to score their first run, and the momentum stuck with the Metropolitans to take the 10-3 victory in game one. 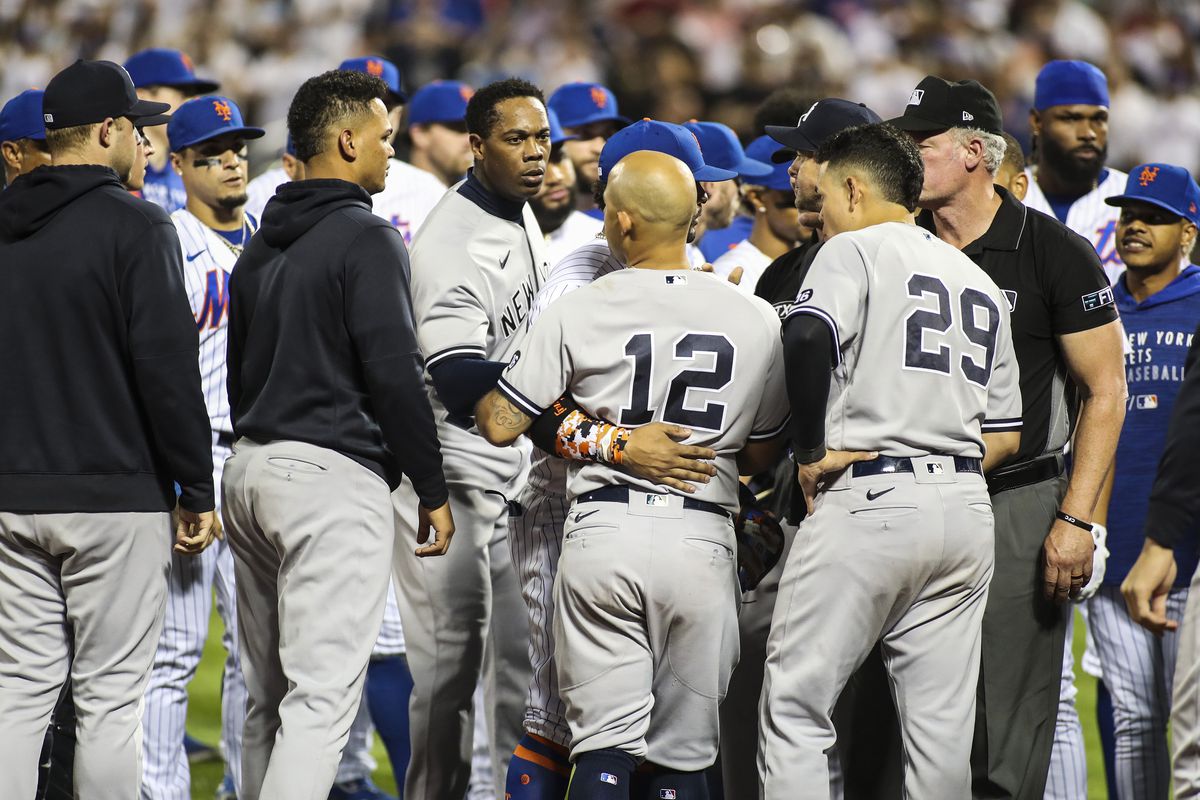 Heading to game two, a very important and emotional game in New York. On the 20th Anniversary of the 9/11 terrorist attacks, the Yankees and the Mets would face off in a game at Citi Field. It seemed like a setting out of a movie, and it turned out to be quite the ballgame as well. Corey Kluber took the bump for the Yanks, going toe to toe with Taijuan Walker. The Bombers put up five runs in the second, capped by an Aaron Judge home run, but could not get any more across, and the Mets stormed back to make it a 7-5 game in the bottom of the 7th. In the top of the 8th, Aaron Judge blasted his second big fly of the game, a two-run shot that tied it at seven and Luke Voit drove in a run on a fielder’s choice making it an 8-7 ballgame where the scoring would end. A massive day from Aaron Judge, continuing the great season that he has put up and lifting his ballclub to a victory. Another important storyline in this game was that the Mets accused the Yankees of whistling from the dugout to tell the batter about the pitch. Saturday would not be the last time we heard about this conversation…

With the series all square at one, we headed to game three. The primetime game on ESPN may have just been the best game of the MLB season. Tons of people on social media were saying that it was more entertaining than the majority of the NFL games we saw on Sunday. Francisco Lindor was the headliner in this ballgame. He carried the Mets to a 5-2 lead after the 5th inning with a homer in the early stages. The Yanks got two back in the top of the 6th, but in the bottom half was where the whistling came back. Lindor hit his second home run then celebrated with a whistle as a sort of stab at the Bombers. The Yankees did not like that. Down 6-4 headed into the top of the 7th and with a runner on Giancarlo Stanton stepped up and crushed a two-run game tying blast into the left field seats. While Stanton was rounding second, he turned to Lindor and put his finger to his mouth telling him that he should not be talking. That was the last straw, and the benches cleared. The cleared benches didn’t last too long, as the Mets got out of the inning and the game was tied at six heading into the last two frames of the game. The Yanks couldn’t get one across in the top of the 8th, then in the bottom half Francisco Lindor struck again. He hit his third big fly of the game, giving the Mets a 7-6 lead and the victory.

The Yanks hopped into a one-game set against the Twins on Monday with Luis Gil on the mound. They fell behind early 5-2 off of three Minnesota homers, but a two run homer by Joey Gallo and later a huge Aaron Judge 3-run homer tied the game, before the Yankees took the game in the bottom of the 10th inning with a one-out single by Gary Sanchez. The thrilling victory put the Yankees 0.5 game back of a wild card spot in the American League before the Red Sox and Blue Jays games were underway. The Yankees also made some news before this game, as Aaron Boone detailed some alignment changes in the field the Yankees will be making as we conclude the season...more on that soon.

To wrap up the season, the Bombers have six more 3-game sets. The Orioles, Indians, Rangers, Red Sox, Blue Jays, and Rays are those six series. Out of these 18 games, the Yanks will probably need 12-14 wins to get themselves into the playoffs comfortably. Headed into the Orioles series, they're going to need a big one. It is make or break time for the Yankees, they control their own destiny.