Welcome back to the first BBBets in two weeks! I took a nice long break following a very rough 0-5 day of picks, the worst of which being a Braves moneyline bet in a game in which they ended up losing to the Padres 12-1. Before that day I was 7-2 in bets given out for a net positive of +3.59 units. After that day I am looking at 7-7 in bets that I’ve given out for a net negative of -1.31 units. One bad day ruins quite the promising start to the season. While I am slightly positive in all of my MLB bets this season (including the bets I hadn’t given out), I want to get my record back on track and move my net losses back into the net gains on my BBBets picks. With that said, let’s get to the bets.

@nicksims14 Looks to get his season back on track with today’s #BBBets I wish you all a very pleasant let’s win money🤝🤝 pic.twitter.com/XhKvTMSANt 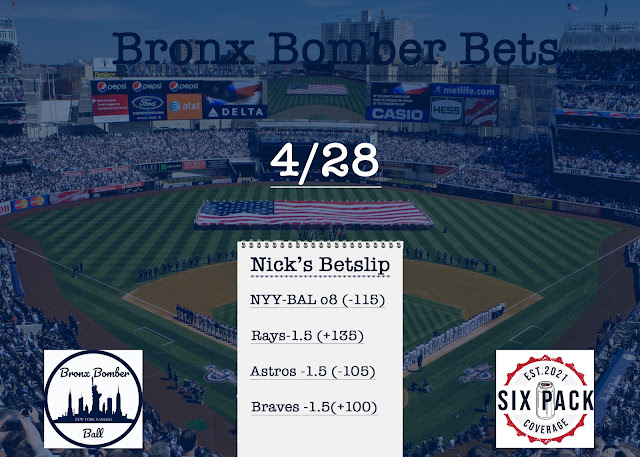 We're going to start with the Yankees and Orioles game today. Both of these teams are some of the best under teams in the league, but both are also on a streak of 3 out of their last 4 games going over, with the only under being last night where they scored 7 runs combined in a game with an O/U of 8. With this information and also the fact that today is a day game, I think the bats of both teams stay alive and they hit a lower over of 8. This is a little bit dangerous as I haven't seen any lineups yet, and Aaron Boone loves a nice throwaway lineup on get-away days, and the Yankees will be in Kansas City tomorrow night.
Next we have another early game, and I'm taking Rays -1.5 over the Mariners. The Rays won this matchup last night 3-2 in a low scoring affair. I don't think they give up more than two or three runs in this game, so I just need four or five runs today from the Rays offense, which is one that averages 4.3 runs scored per game so far this season.
Our last day game pick on the bet slip is Astros -1.5 against the Texas Rangers. Today we have a matchup of Justin Verlander and Martin Perez. Since coming to Houston in 2017 during the Waiver Trade Deadline, Verlander has just won. He has a record of 44-16 since making the move to Houston (for reference, he had a 26-17 record in his last two seasons in Detroit, 2016 and most of the 2017 season). He's continuing to be an absolute alien into his year 39 season, where so far he has given up 2 earned runs in 3 starts and 19 innings pitched. Because of this freak, I'm going with Astros run line.
Final bet of the day comes in one of the few night games today, where I'm going with the team that made me look absolutely foolish last time I posted one of these, Braves -1.5 over the Cubs. As I'm writing this they just announced that Ronald Acuna was recalled to the roster, so I would imagine he's going to be in the lineup tonight for the defending champions. The game is set to pit Drew Smyly for the Cubs up against Kyle Wright for the Braves, who have both been pitching pretty solid so far this season, so u8 (-105) could be an interesting play for this game as well.
By Nick Simonelli
Follow @nicksims14 Follow @BronxBomberBall
Atlanta Braves Baltimore Orioles BBB Betting Tips BBBets Houston Astros Justin Verlander New York Yankees Seattle Mariners Tampa Bay Rays Texas Rangers