Hello and welcome again to Bronx Bomber Bets! This will be our second BBBets of the season, with the first being last Friday where I started 4-1. I didn’t give out any bets this weekend, but had an overall pretty solid weekend, and then saved myself yesterday by not giving out any picks (I had the graphic made and had began a blog) on a day where I ended up going 1-3. I’m gearing up to end that cold streak at one day today, and I have 4 bets that I think will return my hands to their heat from this weekend. It’s just picks from me again today, but hopefully later this season we start getting bets from our other two resident degenerates at BBB, Andrew and Luigi.

Happy Tuesday!! You guys have been good, so you can have a little #BBBets as a treat.
Bets by @nicksims14 pic.twitter.com/oF5B7vfnaD 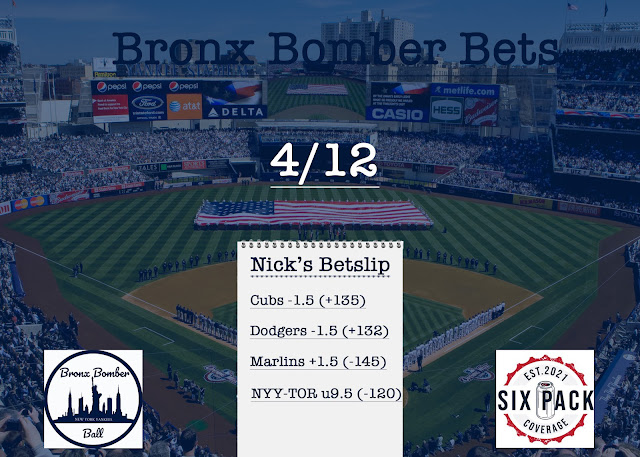 As opposed to Friday's first BBBets of the year, I actually got this graphic made and tweeted it out with more than enough time before the games start today. So for those of you who read along on Friday, this blog will sadly have no live updates of today's Yankees game sprinkled throughout me explaining my bets.

Next we have Dodgers -1.5 (+132) in an away tilt with the Minnesota Twins. Similar to the above bet, I like when I see plus-money odds on my bets. Also similar to the game above, I like the Dodgers to run away with this one. This says less about the Twins, who I think are going to be a very solid team this season, and more about the Dodgers continuing their dominance from the past five-or-so seasons. Over that time, they have been a top team in the league consistently and I like them to continue that dominance this year.

Our third bet (as I'm just now realizing that these are not in order of game start time, so keep that in mind as you read this) is Marlins +1.5 (-145) in Anaheim against the Angels. Jesus Luzardo and Patrick Sandoval will face off in this one. The Angels won last night in a pretty ho hum 6-2 game that had a combined 10 hits (4 of which were home runs). I like the Marlins to keep this one close at the least, and wouldn't be shocked if they picked up the money line victory (+130).

Finally, we have under 9.5 runs in NYY-TOR (-120). The Yankees' offense has shown they could very well have the same problems they did last season (home run or bust mentality, struggle hitting with RISP, lots of strikeouts). Additionally, their starting pitching and bullpen has looked pretty solid for the most part in the opening four games of the season. Nine and a half is a big number, and I think had it been eight and a half I might have considered betting the over, but that extra run has me feeling the under tonight.

That's all I have for today. Lets win some money!