First (And Maybe Last) Bronx Bomber Bets of the Season

Welcome back to BBBets, featuring some of your favorite gamblers to fade! Today we only have bets from Nick, so fade away! (Tweeted just before Yankees’ first pitch LMAO) pic.twitter.com/TXnDPfuGHE 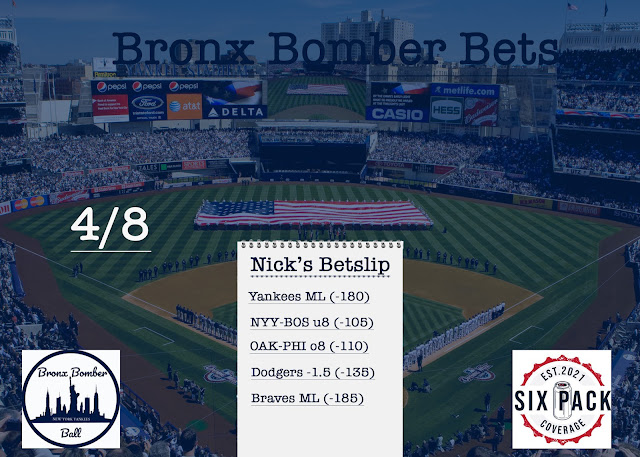 Today's bets are courtesy of yours truly, and yes I tweeted out the slip just before first pitch of the Yankees game but I had a busy morning, so cut me some slack (even though this blog is well after the game started).

Let's start with the bets that are too late to fade, but as I'm typing are not looking great (Gerrit Cole just gave up a 2-run home run to Rafael Devers). I went with the Yankees ML and the under of 8 runs because my expectation was for this to be a lower scoring game with hitters still trying to get the rust out of their swings. So far it definitely isn't looking that way but it is a long game (JD Martinez just hit an RBI double, but I did tell you to fade me so anyone who has the same bets as me: it is 100% your fault).

Next we'll look at the Phillies-Athletics over 8 runs. I really like what the Phillies did this offseason and I'm very excited to see what their offense can do. Maybe the Phillies broadcasters can learn the trick and talk about something tragic every time Nicholas Castellanos comes up to the plate, so he can hit a few monster dingers and make me look smart.

Next we have Dodgers -1.5 runs at the Rockies. I don't think there's much to say here, I don't hate the Rockies adding Kris Bryant this offseason but the Dodgers are probably the best team in the league and I'm looking for them to show their dominance early against an inferior foe.

(Side note: Anthony Rizzo just hit a 2-run blast to bring the score to 3-2, RIP this under but Yankees ML is still verrry feasible)

Finally we have the defending champion Braves money line at home against the Reds. The Reds took the opening day game yesterday against the champs, and I like the Braves to answer with a bounce back win today in Truist Park. Even without Ronald Acuna Jr. to start the season, the Braves are one of the best teams in the league and I don't think they're going to start their title defense by losing back-to-back games to the Reds.

That's it for today, we'll see you next time and I promise to tweet out the bet slips out with more than a minute to spare before first pitch!