With just four days before Opening Day, the Yankees are rounding into regular season form down in Tampa and finalizing their roster they’ll bring up North with them for their Thursday matinee against the Boston Red Sox.

The Yankees have been running out lineups much more reminiscent of a regular season lineup of late.  Some of New York’s biggest contributors over the past week have been:

Higgy has been a lightning rod for the Yankees in camp this spring, as his seven home runs lead the majors.  With Gary Sanchez out of the way in Minnesota, his path to being the #1 catcher on the team could not be any clearer.

Marwin was a late arrival in camp – signing with New York just as spring games were beginning – but has done nothing but hit since.  His versatility in the field makes him a likely candidate to make the Opening Day roster.

Newcomer Josh Donaldson has firmly entrenched himself as Aaron Boone’s new leadoff man heading into the season. While unconventional, he’s been a breath of fresh air atop the lineup, allowing DJ LeMahieu to drop to the middle of the order where he can be an RBI machine this year.  Donaldson’s health is of course the biggest concern, but so far so good.

The Yankees also made a pair of trades over the weekend, acquiring Jose Trevino from Texas as their backup catcher (Ben Rortvedt has not returned to action as of yet in his recovery from an oblique injury) and right-handed reliever Miguel Castro from the Mets.

The New York Yankees today announced that they have acquired C Jose Trevino from the Texas Rangers in exchange for RHP Albert Abreu and LHP Robert Ahlstrom.

The New York Yankees today announced that they have acquired RHP Miguel Castro from the New York Mets in exchange for LHP Joely Rodríguez.

In the Trevino deal, the Yankees bid farewell to Albert Abreu who came to the organization in the Winter of 2017 from Houston for Brian McCann.  Abreu never achieved his lofty expectations, and became expendable with the New York bullpen full heading into Opening Day and Abreu out of options.  For Castro, the Yankees traded away Joely Rodriguez who was acquired from Texas in the Joey Gallo deal last summer, and despite decent performance in the Bronx last year, had been dealing with an injury and reduced velocity this year.  Rodriguez also struggled against right-handed hitters.  The New York bullpen is already stacked with left-handed relievers, the others of which don't have as severe platoon splits, so the Yankees were able to flip Rodriguez for Castro who spent the last two years with the Mets, and before that, the Baltimore Orioles.

Trevino isn’t much of a hitter, but is a masterful pitch framer and should be a welcome addition to the team – particularly by the pitching staff.  Castro has been about 10-15% better than league average the past few years (by ERA+), but has some tantalizing peripherals that Matt Blake is likely salivating to get his hands on: 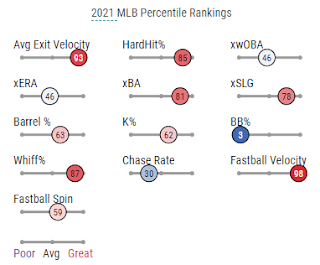 Miguel Castro will be under team control for just the 2022 season, while the Yankees will retain the rights on Trevino through the 2025 season.

With the acquisition of Trevino, a trio of catchers seeking to make the MLB squad were all assigned to triple-A Scranton/Wilkes-Barre: