Don’t look now, but the Yankees might be hitting their first real rough patch of the season.  While it’s hard to complain about a team with a 58-23 record at the midway point of the season, the Yankees have a crucial stretch of games coming up against the second-place Boston Red Sox, and the offensive has gone through a bit of a cold streak that hopefully doesn’t linger through those important games. 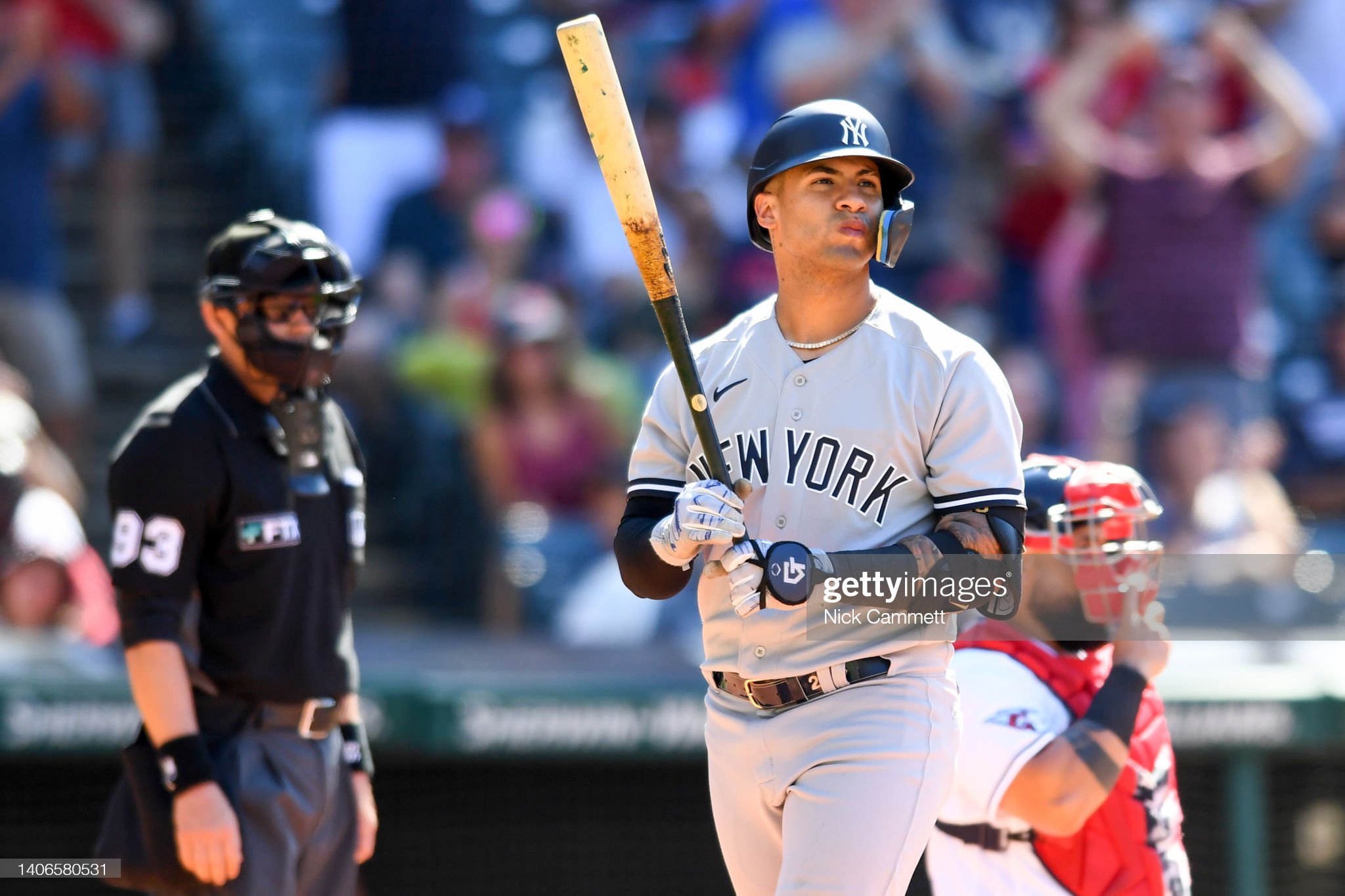 The Yankees offense can still pop off at any moment, as evidenced by their 13-4 bludgeoning of the Cleveland Guardians in game one of Saturday's double header, however, the Yankees have also been no-hit recently (the first time in almost 20 years), and the offense has been held to two or less runs six times over their last 11 games.  The pitching, which obviously could not be expected to maintain it’s historic stretch earlier in the year, has taken a step back as well.  As such, the Yankees aren’t able to escape with 3-1 wins on a nightly basis right now and need more from the offense to carry us through the All-Star break.

While they maintain a 13-game lead over Boston in the AL East as of Wednesday morning, they are set to play the Red Sox seven times over the next week and a half and it’s possible that Boston could cut into that lead significantly if they can pull off a 5-2 or 6-1 stretch against us.  In order to keep Boston at bay, the Yankees will need more from the following hitters:

It’s hard to be critical of Judge, who by all accounts has been the American League’s most valuable player over the season’s first half, however, he’s gone ice cold of late.  Over his last 11 games (10 starts), Judge is hitting a paltry .128/.227/.308 with two home runs and seven RBIs.  While he’s limited his strikeouts to just 12 over 39 at-bats (45 plate appearances), he’s not mashing the ball at the level we have come to expect from him, and the Yankees’ offense has struggled in kind.  Judge hasn’t been a super streaking hitter over the course of his career, but the Yankees need him to figure it out, and fast.

Following his dramatic game-tying three-run home run off Ryan Pressly in the first game of the Houston series a few weeks back, Hicks has gone straight into the gutter.  In 10 games since (nine starts), he’s slashing at a pathetic .143/.294/.179 with no home runs and only two RBIs.  The Yankees were very successful in-spite of Hicks earlier in the year, but with Judge and some other key contributors struggling, this was an opportunity for Hicks to step up and help the team win some ballgames. He very much has not, and it opens the door again for the Yankees needing to look outside the organization for outfield help at the trade deadline because of his and another regular starter’s embarrassing performances… 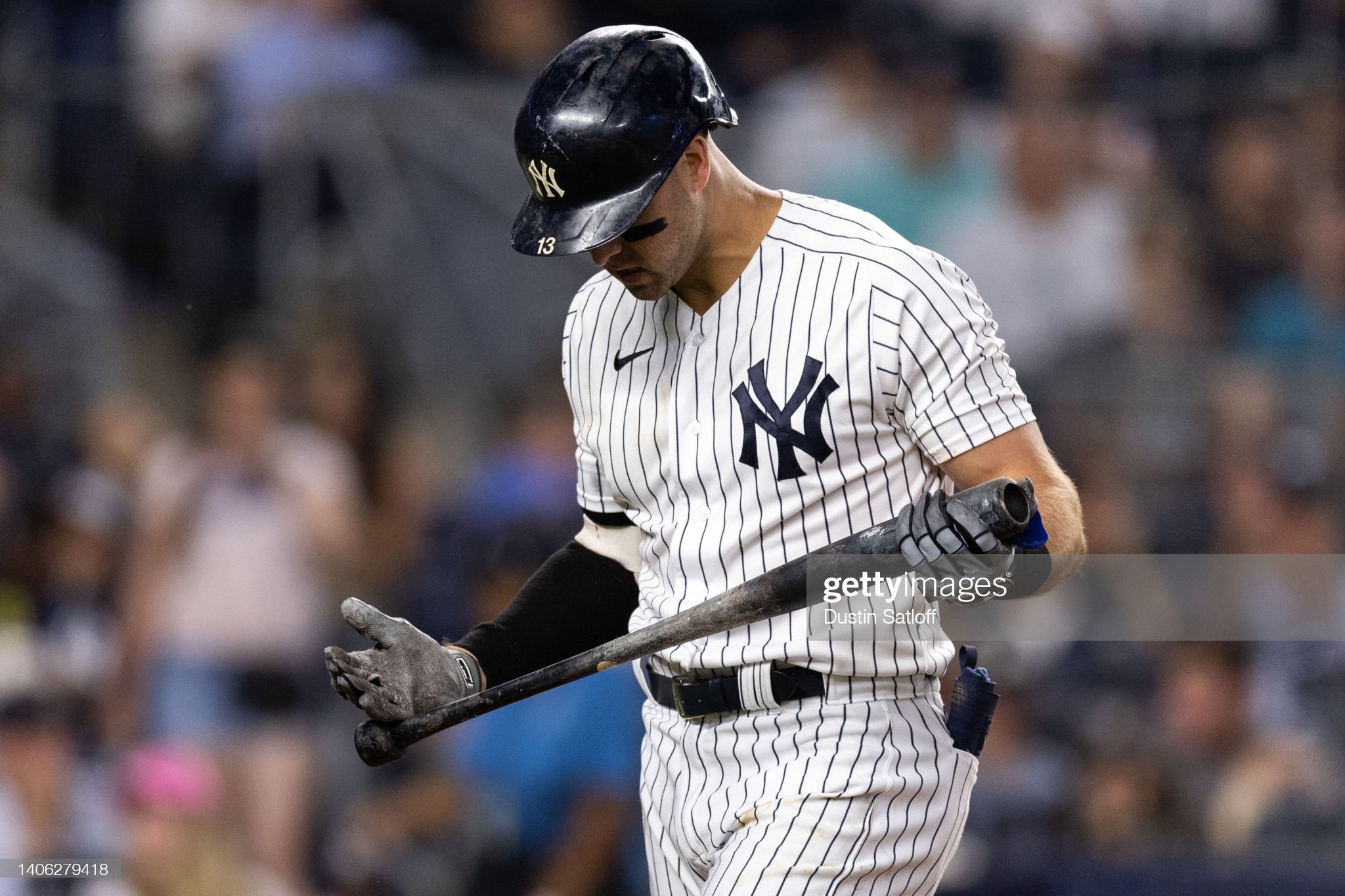 …which brings us to Joey Gallo, who continues to be the worst hitter on this ballclub and finds himself in the middle of an absolutely miserable stretch at the plate.  Over his last 13 games (11 starts), Gallo has gone an almost impossible to believe 1-for-32. Yes. ONE HIT in 32 at-bats.  His slash-line over that stretch is .031/.184/.031.  He has struck out 18 times over that stretch (56.25% K rate).  He doesn’t have a single home run or RBI or extra base hit.  He is, quite simply, a total waste at the plate, and the Yankees have to seriously consider DFA-ing him because there is not one thing he is offering this team right now outside of some solid OF defense and an occasional walk. All things the red-hot Estevan Florial could provide as well.

Other Yankees who have been struggling at the plate over the last two weeks:

Hitting is contagious, but like we saw far too often last year, so are struggles at the plate.  It’s still way too early to worry about this team completely falling apart, however, there have been some ugly outings of late that need to get tightened up if this team wants to achieve its ultimate goal of winning a World Series this year.  Performances like these are fine in the middle of a 162-game marathon of a season with a double-digit division lead, but they absolutely will not get it done in October.